Bread and Groceries – The Goette Family 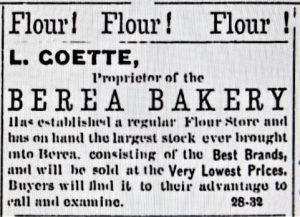 Louis B. Goette was born in Korbach, Germany on November 6, 1823 and arrived in the United States on September 15, 1859, settling in Cincinnati. Louis was a trained baker and was encouraged to move to Berea by missionary William Nast. Upon arrival in Berea that same year, he started the town’s first bakery, and over time, he added groceries to his establishment. In September of 1860, Louis married Mary Mueller from Cleveland (born in Germany), and they had 10 children: Louis F., born in 1863, Albert F., born in 1866, Charles F., born in 1870, John Edward born in 1875, George C., born in 1878, Ida, born in 1871, and Clara, born in 1882. Three children died in infancy; two of them (born 1869 and 1873) were buried in the Adams Street Cemetery.

In 1870 the family was living on Seminary Street, and by 1880, Louis F. was assisting his father in the store while the rest of the children were still in school. It is noted in the local history that in 1888 Louis Goette was appointed as a night watchman by the mayor, causing quite a stir among the citizens over his monthly pay of $65/month. Young Louis married Maggie Merkle in 1889, and they had a son William in 1894. In the 1900 census, most of the Goette family was still together on Seminary Street, and all of the children were working. Louis F. was listed as a teamster, Charles was working in the family grocery store, Albert was employed as an interior decorator, Ida was a successful milliner, J. Edward was a newspaper reporter, George was a grocer and salesman, and Clara was already teaching school. Louis B. Goette died of old age on September 9th, 1906 in Berea. 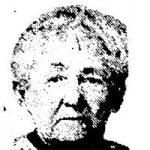 Louis F. Goette went on to own a livery and hauling business in Berea, along with a coal delivery business. In 1926 he was living in Eustis, Florida, managing a citrus company, and his son William was teaching there. Wife Maggie Goette died in 1930, Louis died in 1947, and both are buried in Florida. Albert Frederick Goette was an interior decorator and paper hanger, and in 1928 he married Mary Gourlay from Scotland. He served several terms on the Berea Council, and died March 30, 1943 in Cleveland from pulmonary tuberculosis. His wife Mary returned to Scotland in 1953, passing away there in 1970. Charles Goette married Miss Anna Merkle in 1909. In 1910 they were living in Cleveland and he was employed as a conductor on the Street Railway, and in 1920 he was working as a coffee salesman. In a 1926 city directory he was working as a salesman in Eustis, Florida, but by 1930 he and Anna were back in Berea living in the family home on Seminary Street with his mother, Ida, and Clara. In 1940 Charles was living alone on Factory Street, his wife having passed away in 1939. His mother, Mary Goette, died in 1931 at age 86 from the flu and senile myocarditis and was buried at Woodvale with Louis in Section 3, Lot 16.

John Edward Goette married Miss Anna Rodd in 1904 and they had two sons, Robert and Edward. Early on J. Edward worked for the Berea Enterprise as a reporter, then as a reporter for the Cleveland newspapers. In 1910 he was an attorney in Berea living on E. Bridge Street, and by 1912 he was the Assistant Probation Officer in Berea. He later worked in the Juvenile Court as a deputy clerk and also worked in the Probate Court in Cleveland. He died on July 12, 1928andwife Anna died in Lakewood from the flu and acute myocarditis in 1942. Both are buried at Woodvale. 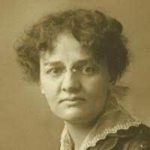 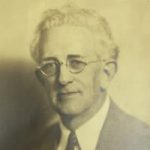 George C. Goette married Miss Ruth Riddles in 1907 and continued in the family grocery business, living on Henry Street. They had 3 children: Katherine, and twins Dorothy and Donald, and lived on East Center Street in 1920. George was the director of the Better Business Bureau in 1929, and was hailed as the first Democratic Mayor of Berea. He served as mayor from 1929-1932, and had the distinction of being the last mayor when Berea was a village, and the first when it was designated a city. In 1930 he quit the grocery store and bought the tire business of Hiram Christian, moving his residence back to Henry Street. Son Donald helped run the business and later ran the enterprise. George died June 18, 1941, and Ruth died in 1965. Kathryn married Myron McEwen and had two children, while twins Donald and Dorothy never married. The twins passed away just months apart in 1990. 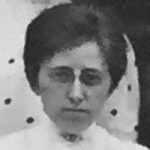 Ida L. Goette worked in the millinery business in Berea and Cleveland most of her life, but never married. She lived in the family home on Seminary St. with her sister Clara, but they also lived on Beech Street for a time. She passed away on June 22, 1950. Clara A. Goette taught school her entire life and retired from Lincoln High School in Cleveland as the music teacher in 1949. She never married, and died in January 1969. Both sisters are interred at Woodvale. It is noteworthy that until the 1940s, school systems in Ohio and most other states were still allowed to deny employment to married female teachers, or terminate their employment if they did marry. WWII had a lot to do with changing that system.