James Shelton Smedley was born in South Farms, Connecticut on September 12, 1813. At some point he moved from North East, Pennsylvania to attended Oberlin College, graduating in 1841. He also continued his education at Oberlin in the Theological department and is listed as an alumnus from that discipline in 1844. He married Miss Maria Stevens (born May 14, 1817) on November 7, 1842 in Medina, Ohio. They lived in Michigan for a time where their first daughter Lucelia was born on September 19, 1843. The family lived in Strongsville in 1846 according to tax records, but probably moved to Berea around that same period. Their son Irving was born in February of that year but died in April and was buried in the Adams Street Cemetery. 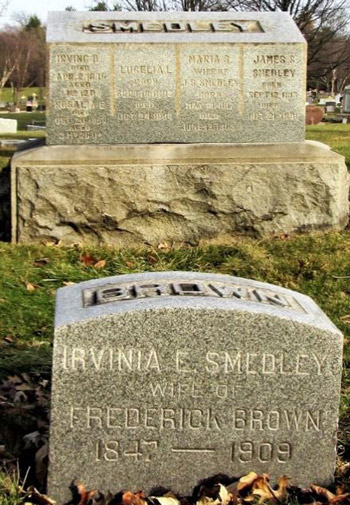 The Smedley family was noted to be living in Brunswick, Medina County in the 1850 census, and listed daughters Irvinia (born 1848) and Rosalia (born 1850). Rosalia survived a little more than 3 months. James was working as a clerk and merchant at that time, but the business is unknown. There is some question as to the birth of another child during that time, but the records are not clear. In 1852 the family was living in Berea where James was employed for three years as one of the first teachers of the Berea Union School, as well as the first principal. A son, Frederick Shelton Smedley was born December 16, 1854 in Berea, and the family was living on Adams Street.

The First Congregational Church of Berea was founded in 1855, and James was listed as the first trustee, and one of the first deacons to serve the church. He also served as a township trustee in 1859, 1861-1863, and again in 1867. In the 1860 census, James is again listed as a clerk, and an additional infant was listed with the family, still on Adams Street. No further information was found concerning the baby. The oldest daughter, Lucelia Smedley, just 21 years old, died on October 25, 1864 and was buried in the Adams Street Cemetery. James was elected mayor of Berea in 1865 but suffered the unfortunate loss of his wife Maria from consumption in June of that same year. She was buried in the Adams Street Cemetery as well. On a happier note, Irvinia married Fred Brown on August 28, 1866. Fred was born in England in 1842 and worked in his father’s furniture and undertaking business in Berea.

James and his son Frederick, aged 15, are listed as still living on Adams Street in 1870 and the vocation for James was listed as farming. Fred and Irvinia along with two children are living at the Smedley residence while Fred continued to work as a carpenter in his family’s business. At some point James became a hardware dealer, and Fred Brown joined his father-in-law in this business to become Smedley and Brown Hardware in 1873. Frederick Smedley graduated from Oberlin College in 1876, and married Miss Alice Minton on October 25, 1877 in Wood County, Ohio. In 1886 Frederick joined the family hardware business, which became known as Smedley, Brown & Company.

James Shelton Smedley died in Berea of pneumonia on October 21, 1896 and was buried in Woodvale Cemetery in Section 1, lot 35. It is assumed that the family members in the Adams Street Cemetery were removed to Woodvale around this time. Frederick Smedley started a photography gallery on Bridge Street about the same year, and it was burned to the ground in the second largest Berea fire in 1897. He is listed as a photographer in the 1900 and 1910 census records. The hardware business eventually became the Fred Brown Hardware Company on the corner of Bridge and School Streets. It is noted that the Smedley family genealogy has ties to the Daughters of the American Revolution.