Alexander McBride was born in Poland Township, Trumbull County, Ohio on Jan 12, 1822. He received his education in the local schools and went on to work in a woolen mill eventually becoming a partner. He was known to often purchased books with his earnings to further his education. He eventually sold his interest in the woolen mill, and taught school for a time. He went on to study medicine in Akron, graduating from the old Cleveland Medical College of the Western Reserve College in Hudson in 1845. Doctor McBride started his initial practice in Sullivan, Ohio and removed to Berea in 1847 where he became the first resident MD in Berea. The first area physician was Dr. William Knowlton in 1838 who was residing in Olmsted Falls.

Alex married Emma Henry in Berea on January 1, 1849. Daughter Agnes McBride was born in Berea in 1854, and Lucy was born in 1859. There is question of another infant (Mary) that may have been the first born and did not survive. In the 1860 census the McBride family had a young 26-year-old clerk James Parker living with them. With the advent of the Civil War, Alex volunteered for service in 1861 and enlisted as a commissioned officer in Company S of the Ohio 40th Infantry Regiment on Sep 7, 1861 serving as a surgeon and mustered out on Apr 1, 1862. Dr. McBride then enlisted in Company S of the Ohio 88th Infantry Regiment on Jun 26, 1862, and was mustered out on Sep 26, 1862 at Camp Chase, Ohio. After his service, Dr. McBride resumed his practice in Berea, and in 1867 he served a term as mayor.

​Dr. McBride continued to gain knowledge throughout his career and wrote several medical articles. Many were based on his own theories that at times brought criticism among the medical population. He was evidently not afraid to express his opinion, theories or ideas on any subject. He also developed new forceps for obstetrical use that were widely accepted. It was noted in his obituary that “his reputation as a man thoroughly informed in his profession and skillful in his practice, caused his opinions and advice to be frequently sought by his fellow practitioners”. He was an active member of the County Medical Society and the first secretary and historian of the Middleburg Pioneer Association in 1875.

In 1870, the girls were living at home and attending school. The medical office was part of his home (now Riverside Gables B&B), and it is likely the addition to the home was for Agnes to practice music as it includes to this day music lyre ornamentation on the balcony. In 1872 Agnes was attending the Conservatory of Music at Oberlin College, and in 1873 Lucy was attending preparatory school at Baldwin University in the scientific program. In 1871, Emma
who had been ill, had gone to Oberlin to stay with Agnes. The day before she was to return to Berea on July 27th, she took a turn for the worse and became bedridden with pneumonia. Dr. McBride and Lucy moved to Oberlin to take care of her, he returning to Berea weekly. Unfortunately, Emma succumbed on Feb 11, 1872 of tuberculosis at the age of 47 and was buried in the Adams Street Cemetery. 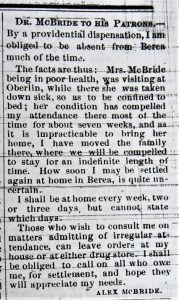 Dr. McBride himself became ill in February 1875 but seemed to make somewhat of a recovery for a time, then gradually worsening. In Feb of 1876 his health declined rapidly. Since he was unsure of his own ailment, he requested an autopsy be performed by several of his peers in order to further the medical field after his death. He passed away at home on February 5th, 1876. There were various opinions from the autopsy, but all agreed his disease was “tuberculous in nature, affecting the stomach and intestines with spreading to the lungs, kidneys and other organs”. He was buried in the Adams Street Cemetery on August 6th, 1876. The executor of his will was James S. Smedley. It is unknown what happened to his two daughters over time. Per his obituary, Alex was considered “eccentric and in his associations with others was somewhat abrupt in his manners, decided, very tenacious of his opinions, and outspoken in his views, which traits of character occasionally brought him in conflict with those who thought differently, but there are few men who had a more earnest sympathy with those in affliction. His faults were such as harmed himself more than others.” 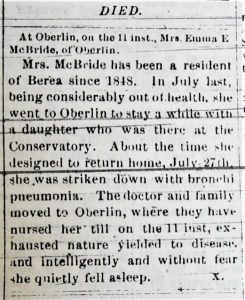 As per other burials in the Adams Street Cemetery, it appears (per a study by Baldwin Wallace) that Alex and Emma were moved to Woodvale around 1900. It is unclear if the infant was moved along with the parents. Woodvale currently has a newer military headstone for Alexander McBride that is a replacement stone for the original military marker. Woodvale does not have records of the transfer which may indicate that they were moved in the 1890s before the cemetery office fire that destroyed most of the records. There is a contract on-line for the initial military headstone being delivered to Woodvale from Vermont in 1901. There is one notation in the 1980s of an unreadable soldier’s marker where the new military marker now stands in Section 3, lot 37. Unfortunately, there is a very large tree that covers the area that would contain the rest of the McBride family, so if there were markers in the last century, they have been lost to nature.